Commissioner for Information & Public Enlightenment.
Don Adinuba The Anambra State government has reacted to the decision of the Economic and Financial Crimes Commission (EFCC) to place Governor Willie Obiano on its watchlist. 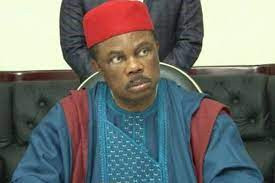 “The EFCC went too far to announce in November that it is observing him. We are not aware of any state governor who had up to four months to be in office and the EFCC went on to sponsor media reports that he was being investigated” Adinuba said
EFFC’s Inelegant Drama over Anambra Governor

The anti-graft agency had earlier written a letter to the Comptroller General of the Nigeria Immigration Service (NIS) requesting the immigration to place Governor Obiano on a watchlist and inform it anytime the governor is traveling out of the country from any of the international airports, as well as other points of entry and exit.

Reacting to this development, the Anambra State Commissioner for Information and Public Enlightenment, Don Adinuba said the governor has four months left to remain in office and the commission went too far by publicly announcing that it is investigating Governor Obiano.
“Governor Obiano has a whole four months to remain in office as the Anambra State chief executive. Nobody in Nigeria can circumscribe his constitutionally conferred immunity which shields him from both criminal and civil prosecution.
Read the full statement below
God bless Anambra State, the Light of the Nation.