“Most of these controversial points that were in my favour, Baffour Gyan was giving the point to Asamoah Gyan. At a point, I became a bit uncomfortable with it. So there was a particular point that to me was obvious that the ball was good, and Baffour Gyan insisted that the point was for Asamoah Gyan”.
According to Martey Baffour Gyan continued to shout angrily at him. ?????? “As he was hitting me, Asamoah Gyan came in support of what Baffour was doing – assaulting me.” After telling them this, he said Baffour Gyan shouted at him in “a very aggressive tone” saying: “My friend shut up and stand there and play”. Martey narrating what had allegedly happened, said the tennis singles game which was set up by a mutual friend took a sour turn when he noticed that all controversial points that were supposed to go in his favour were given to Asamoah Gyan by his brother Baffour Gyan who acted as the umpire of the game.
“Then he came down and came to hit me that ‘my friend go there, I say go and play’. He was hitting me to go and play,” he added. Feeling intimidated by the angry rants, Martey said he quit the game and sat down on the sidelines. According to the complainant Godwin Martey, the alleged assault occurred following a tennis singles match between Asamoah Gyan and Martey, where Baffour acted as the umpire. Martey claims Baffor then charged towards him, slapped him continuously and insisted that he got back in the game. According to Myjoyonline, Godwin became frustrated during the game because of decisions by umpire Baffour Gyan, which made the Gyan brothers assault him. 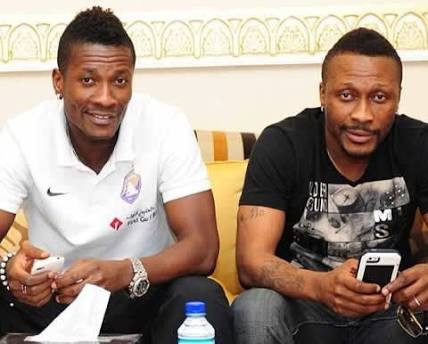 He indicated that although the spectators agreed with him, he received no support from them because of Asamoah Gyan’s celebrity status.
Gyan is Ghana’s higher goalscorer of all time. As at press time he has not responded to the allegation.
Former Ghana international Baffour Gyan (pictured top right), has rejected allegations of assault levelled against him and his brother, Ghana football legend Asamoah Gyan (pictured top left), after a man claimed he was assaulted after a tennis match in Accra on Wednesday October 14. After observing this for some time, Godwin Martey says he was unhappy and asked for a proper tournament to be arranged with a match commissioner and a neutral umpire to ensure fairness to both parties. Godwin Martey, the CEO of Websoft Solutions, said the incident occurred at the 37 Army Officer’s Mess tennis court on Wednesday.
But Baffour, an ex-Dynamo Moscow Player, speaking on Pure FM radio, has now denied the assault claims. Martey has since threatened to sue the Gyans on charges of assault as he moves forward with the case. ”I and Asamoah Gyan didn’t throw our hands at Godwin Martey. It was just an exchange of words. The tempers were high, so some of the words were harsh and I apologise for that but we didn’t fight him physically. How can we fight at the soldier’s premises?”  penetv