“The two people I wanted to see me win were no longer here to see it.”

The father of six continued, “It was difficult. Probably one of the most difficult reality checks in my life…by the way, I never shared this duct taping my stomach down part with anyone on this planet.”

Rhymes temporarily moved to Jacksonville, Fla., for a 30-day kickstart to his training program. He did it and also adhered to an unusual new diet, where he ate every 2½ hours, sometimes consisting of 12 egg whites, oatmeal and a 10-ounce steak.

“You know us being in this entertainment industry, we gotta come out here, we getting in front of these cameras, it doesn’t matter how horrible the day was, we gotta put a good show on for these people and be these great liars sometimes.”

According to Busta who is known for his muscular physique, he let himself add enormous weight with poor eating habits and stopped working out altogether.

“I think the real moments that were cutting deep was when I started to hear the conversations from my kids,” he confided to Hall.
“I’m just at a point in my life as a grown man where I want to be comfortable being truthful and I also want to be comfortable sharing the truth because I’ve become empowered by my vulnerability and I could not be more happier in seeing and knowing that my children is proud of me. I couldn’t be more happier than to finally put out music where I can introduce people to new sides of my life that I never felt comfortable enough sharing, even after 29 years of professionally recording,” Rhymes added.

Rhymes said the moment he knew his weight gain had gotten out of control was during a video shoot.

“The younger one, before he graduated from high school, sometimes when I would come out of the bedroom in the morning and I would put my hand out to give him a dap on the way to the bathroom or something, and he would walk past me and instead of slapping me on the hand, he was slapping me on the stomach.

“That’s when I knew s–t was serious,” he shared
He then revealed how in 2019 one of his sons discovered him asleep in his car struggling to breathe.

Busta Rhymes says it took his son and his security team 20 minutes to wake him and get him inside.
“… There’s a scene of me wearing all white with a head wrap,” he revealed. “When I initially put that all white on, it showed how badly out of shape that I was on camera, so we went in the dressing room and they duct taped my stomach down.”
?????
After the throat surgery, Rhymes discovered bodybuilder Dexter Jackson online after Jackson had tagged him in a workout video while playing his signature song, “Put Your Hands Where My Eyes Could See.”

“I hit him in the DM, I told him I needed his help, and I gave him my number, and he hit me back right away,” he told the magazine.

“The doctor told me that if I caught a cold or slept wrong that I could die….It felt like this was on me now, and I had to steer things in a different direction. I was too young to be on all of these blood-pressure medications and acid-reflux medications.”

This week Monday, January 11, Busta also appeared on “Tamron Hall” to discuss his weight loss journey.
A doctor later discovered that there were polyps in his throat, restricting 90 percent of his breathing and he had to have emergency surgery.

The multiple Grammy-nominee told Hall about his new lease on life.

Weighing 254 pounds, the 48-year-old rapper says he initially gained weight following the death of two important men in his life, his father and his friend and longtime manager, Chris Lighty. 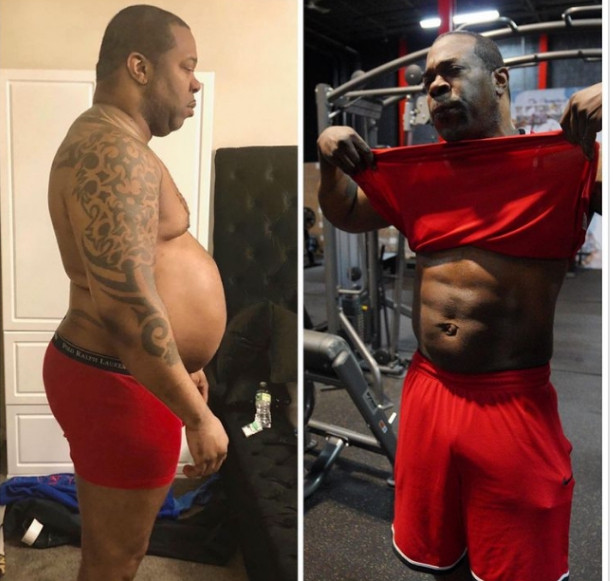 ”He didn’t mean no harm intentionally, but it was becoming annoying to me. It was like him indirectly saying to me, ‘You got to rid of this gut, pop.’”

“I can honestly say for the first time in a long time I am feeling like I’m floating on a whole ‘nother plane of energy and I’ve been noticing that I’ve been comfortably saying that and actually feeling like I ain’t lying to nobody this time,” he shared.

Another reckoning moment happened for Busta that gave him a reality check. Hip-hop icon, Busta Rhymes has opened up about how he lost 100 pounds within a year after almost dying due to a throat infection. penetv