The RRS operatives extended investigation to Osun State where the victim was rescued and Fatima Abdullahi was arrested. 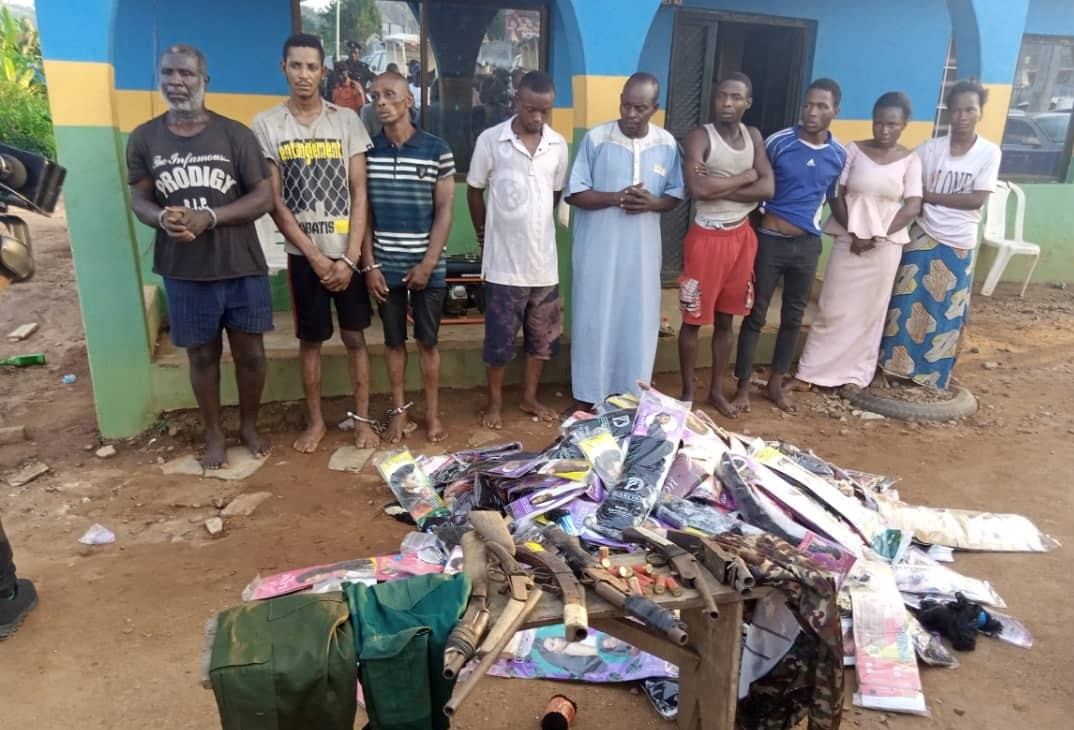 “It was revealed that Ayeni Blessing and Femi Adewale were the ones who identified Late Chief Ayeni Abiodun who was earlier kidnapped by the gang and later jumped out of their moving car but unfortunately died while receiving medical attention in the hospital. During interrogation, Ayeni Blessing confessed to be a member of the kidnapping gang 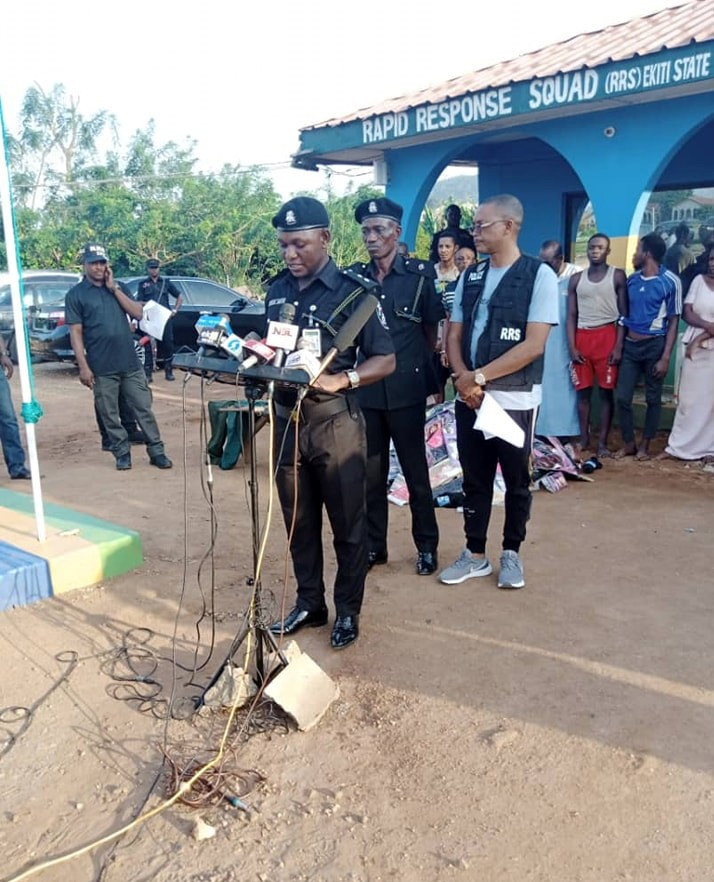 “It should be noted that Dele Jimoh and Ayeni Blessing are two of the three fleeing kidnapping suspects declared wanted by the Command. Effort is on top gear for possible arrest of Samuel Ebira and Dayo Igwe, who were mentioned by the arrested suspects as their gang members.” the PPRP added.  “Also arrested is one Ayo Samuel, a dismissed Policeman, who confessed to be a member of the kidnapping gang and has participated in different kidnappings and robberies in the State “Ali Ibrahim was also arrested and they both confessed to have handed over the victim to one Fatima Abdullahi ‘f’ who forcefully whisked her away to Ilesa, Osun State where the victim was kept hostage for 13days. The Ekiti State Police Command has arrested members of a notorious kidnap gang including a dismissed policeman, Ayo Samuel and one Johnson Apotire, who impersonates herdsmen due to his physical resemblance to Fulani men.  In a different develoment, men of the RRS also arrested one Mubarak Bello at Igbara-Odo-Ekiti where he was demanding N50,000 ransom for the release of a kidnap victim, Shekina.  “Sequel to the arrest of one Adebayo Akeem Banji a.k.a Oro, Ogunremi Bunmi a.k.a Bafon, Ige Adu and Jimoh Fayoke ‘f’ on 06/11/2021 in Ado-Ekiti by the operatives of the Rapid Response Squad(RRS) for conspiracy, armed robbery, burglary, kidnapping, murder and unlawful possession of firearms, police investigation led to the arrest of one Johnson Apotire ‘m’ on 17/11/2021 who confessed to be a member of the notorious kidnapping gang and further stated that he usually impersonate Fulani herdsmen due to his physical resemblance to a Fulani man,” Abutu stated.  “One Ayeni Blessing was also arrested as one of the members of the kidnappers syndicate. The earlier arrested Ige Adu ‘m’, in his confessional statement, mentioned Ayeni Blessing and Femi Adewale* who is still at large, as members of the kidnapping gang whose duty is to identify who is to be kidnapped. 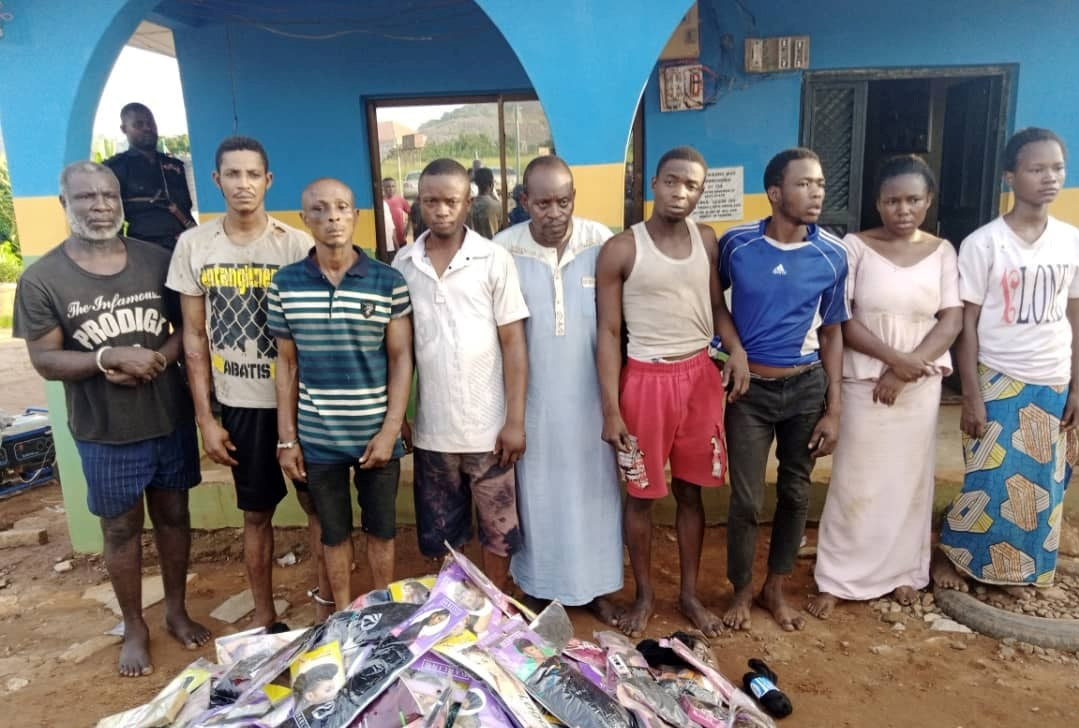 Jimoh stated that he specializes in burglary and stealing, including motorcycle and has burgled more than ten shops/houses, carted away more than twelve motorcycles. “Upon the receipt of the information, the Rapid Response Squad(RRS) Operatives swung into action and arrested one Mubarak Bello in Igbara-Odo-Ekiti where he was demanding for the ransom,” “One Jimoh Dele a.k.a Dele Petim was arrested in Ilorin, Kwara State on 18/11/2021 and confessed to be the third in command of the notorious kidnapping gang. He said the duo identified late Chief Ayeni Abiodun who was earlier kidnapped by the syndicate and later jumped out of their moving car but unfortunately died while receiving medical attention in the hospital. “On 08/11/2021, one Sule Abdullahi ‘m’ reported to the Police that his daughter, one Abdullahi Shekina was kidnapped by unknown persons. On 20/11/2021, the suspect started demanding for a ransom of fifty thousand naira (#50,000:00) from the father via phone call before his daughter could be released,” the statement read.  Alhaji Adebayo Ahmed was, however, arrested in Ilorin, Kwara State on 18/11/2021 by the RRS Operatives. The suspect mentioned one Alhaji Adebayo Ahmed as his major receiver of the stolen motorcycles and other loots. According to him, Alhaji Adebayo Ahmed is not unaware of his criminal activities. During interrogation, the suspect confessed to the commission of the crime and mentioned one Ali Ibrahim a.k.a Dabadaba as his accomplice. He confessed further that the four guns earlier recovered by the police were concealed by him in his mother-in- law’s house in Ado-Ekiti.
Briefing newsmen on Wednesday, spokesperson of the command, ASP Sunday Abutu, who represented the State Commissioner of Police, Tunde Mobayo, said two members of the gang, Ayeni Blessing and Femi Adewale, whose duty was to identify victims for kidnapping, were also arrested.  penetv