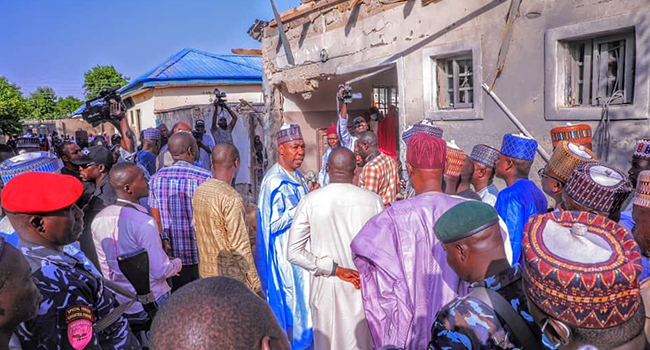 “It seems the insurgents came very close to the town, the military has to wake up and ensure adequate surveillance. This is something that we can avert its occurrence. For the insurgents to have come such close to fire rockets, I think there is something wrong that we should have to check. The Governor said;  He added;  He urged the military to wake up and ensure adequate patrols, adding that government will do everything to prevent further attacks on Maiduguri and its environs.

“I wish to sympathize with those affected by today’s attack, I will constitute a small committee to ascertain the level of the damage and advise government on how to avert future occurrence.”
Governor Babagana Zulum of Borno state has condemned the rocket attack carried out by Boko Haram/ISWAP terrorists in Maiduguri.

Zulum visited persons affected by the rocket attack, noting that the insurgents came close to the capital city before firing the explosives. “We have to fortify Maiduguri town, we have to ensure adequate patrols on a daily basis to avert future attacks. It is very sad and unfortunate we have to witness this kind of attack at this time.”

Governor Babagana Umara Zulum also extended his sympathizes to those affected by the attack.