The Ghana Immigration Service (GIS) has arrested a 20-year-old Nigerian woman who allegedly trafficked Nigerian girls to Ghana to engage in prostitution.
Chidi was apprehended based on intelligence received by the Command indicating that she had, through an agent in Nigeria, lured and recruited two ladies for her prostitution business in Ghana. 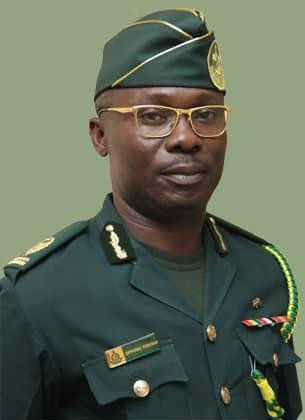 ACI Yeboah said “human trafficking is evil, dehumanizing and illegal in Ghana and offenders are liable to a summary conviction of not less than five years imprisonment. The Regional Commander cautioned parents to take particular interest in the welfare of their female children and be aware of the activities of agents who came to them with promises of taking their children abroad to better their lives. Yeboah affirmed that it was the duty of every Ghanaian to report all matters relating to human trafficking to the security agencies for appropriate action to be taken in order to eradicate the menace from the Ghanaian society. The Tema Regional Commander of the Ghana Immigration Service, Assistant Commissioner of Immigration (ACI) Kojo Oppong Yeboah, who confirmed the development in a statement issued to the media on Tuesday, November 17, said the victims, a 20-year-old fashion designer and a 19-year-old girl, who had just completed her secondary education, were both rescued before they were transported to the Western North Region. The suspect and the victims had all been referred to the Headquarters of the GIS for further investigations and prosecution. It was gathered during preliminary investigations that four ladies were recruited in Nigeria and promised to be offered lucrative jobs as sales girls in Ghana, but were to be distributed to some unknown female prostitute kingpins, precisely in Enchi in the Western North Region of Ghana. “Pursue their education to the highest level or learn a trade, because soliciting for prostitution is illegal and it also comes with a lot of health risks.” he said.  Unfortunately, upon arrival, of immigration officers at the pickup location, two of the ladies had already been removed by accomplices and relocated to an unknown destination. Confirming the arrest in an interview on Wednesday, the Head of Public Affairs of the Ghana Immigration Service (GIS), Michael Amoako-Atta stated that the case has been sent to the appropriate authorities to be dealt with from there while the Tema Regional Command continues investigations alongside. “Looking at the nature of the trafficking issue, the Tema Regional Command has, as we speak, forwarded the victim and the suspect to the National headquarters for further investigation and possible prosecution in the court. We are still doing an investigation, it looks like there are others that have to bring on board pertaining to this particular arrest.” he said. He also advised young ladies not to be tricked by unscrupulous persons to journey for non-existing jobs abroad. The suspect identified as Favour Chidi, who claims to be a prostitute herself, was arrested by officers of the Tema Regional Immigration Command for attempting to transport two Nigerian girls to Ghana under the pretext of getting jobs for them. “In addition to the jail term, properties acquired from proceeds of human trafficking will be confiscated and auctioned to fund anti-human trafficking programmes.” he added. Further investigation revealed that Chidi was once a victim who was brought to Ghana to work for a woman as a prostitute at Enchi, and after serving for four months and paying all expenses incurred on her as part of her recruitment deal, she was set free. She then started her own prostitution business and that was when she requested for the ladies to be sent to her from Nigeria to work for her as prostitutes. penetv