“I got six false teeth placed in August 2020 and I’m going to put two bigger ones in, even though I’m having trouble eating and drinking.

In the last couple of years, Rico has been turning himself into a monster-like creature with fanged teeth, a split tongue and tattooed eyeballs.
“The new Orc modification project consisted of the implantation of two more tusks (two large teeth), body art which is almost all in black with some grey spots and some burns and modifications.

He said: “She did a perfect job and I’ve already scheduled in with her again for the next mission.” 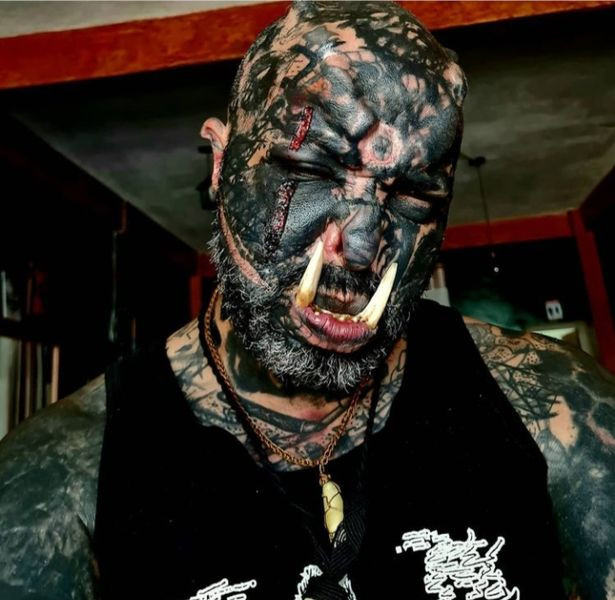 “I can’t say much about the film but I can say that it will be innovative and playful – something that has never been seen before in cinema.

He said: “We will start filming in October in Barcelona and the Canary Islands.

Rico and his wife Krishna, who is a body piercing pro and goes by the name “Bat”, met online before getting married.
His look has earned him the attention of film producer, Michel Reilhac, who is best known for his films Snow White and The Intruder and now he’s set to make his hollywood debut .

“The teeth were the final touch to the Orc project and came after a lot of study and sleepless nights.”
Rico “Orc” Ledesma, 41, is set to star in a Hollywood film after transforming himself into a monster-like creature with eyeball tatts, tusks, a stretched septum and split tongue.

Ledesma who lives in Brazil, is an avid tattoo addict.

He is married to Krishna Insomnia, 25, they have a daughter and are expecting another child.

His blackout tattoo was done to compliment the body mods and was “the most time-consuming and one of the painful parts” of his transformation. Most of the tattoos were done by his wife.

Rico’s teeth were done by a dentist who “embraced” his project.

“Me and the whole team are very anxious for the cinema debut.”

He said: “She loves and supports me in all my transformations.

The artist says his family and friends love his new look – even his daughter.

He spent £400 having two giant fake teeth fitted to his mouth and has eight subdermal piercings placed under his skin.
Rico explained: “I started to change seven years ago in order to look different but the project to look like an Orc is less than a year old. 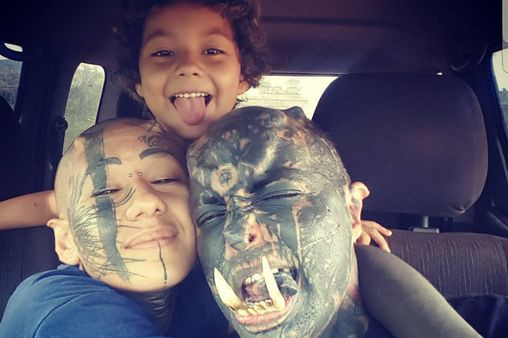 “If one day in the very distant future she wants to make some changes to her appearance too, I will be proud of her.” 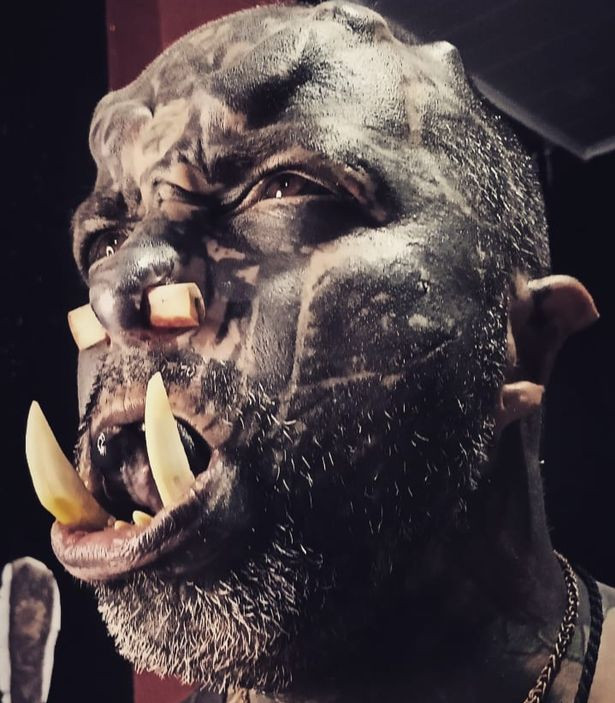