Investigations by the Police team revealed that the Golf-3 saloon car was given to Dayyabu as his operational vehicle by one of the wanted bandits, with a promise that the full ownership of the vehicle will revert to him on completion of five successful arms delivery missions.
The operatives of the Special Tactical Squad deployed to that area were quickly mobilized and went after the suspects to rescue the victims. The Police operatives eventually identified the hideout of the criminals, launched a rescue mission and successfully rescued the hostages, including the women, unhurt. The Inspector General of Police, IGP Usman Alkali Baba, psc (+), NPM, fdc while commending the team for the successful operations, assures the nation that the Force would continue to close-up on these criminal elements who pose threats to our national security. All the suspects will be arraigned in court on completion of investigations. These suspects smuggle the stolen cars through our international borders and deliver same to a major criminal receiver called Alhaji Garuba (still at large) in Niger Republic. 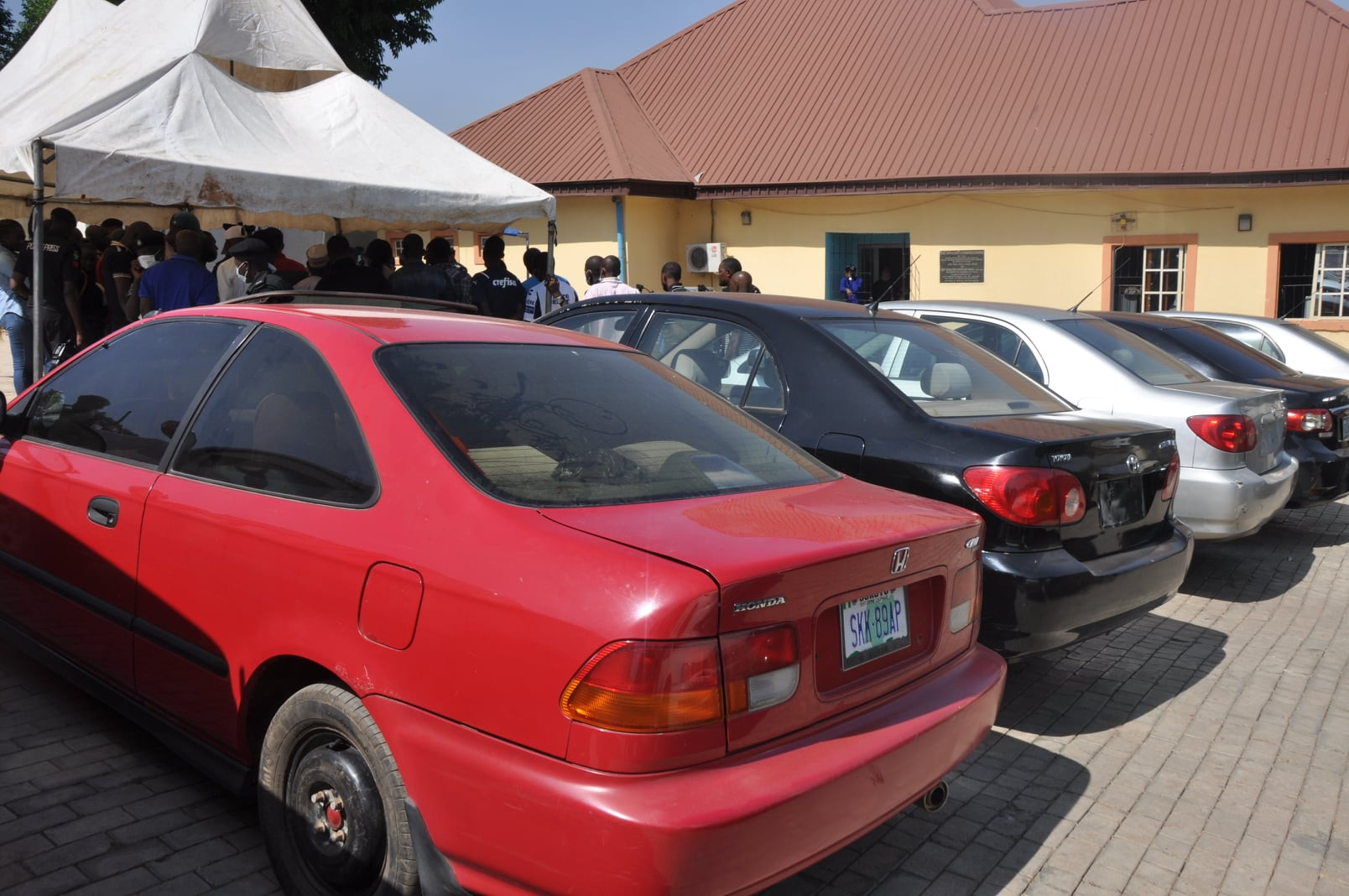 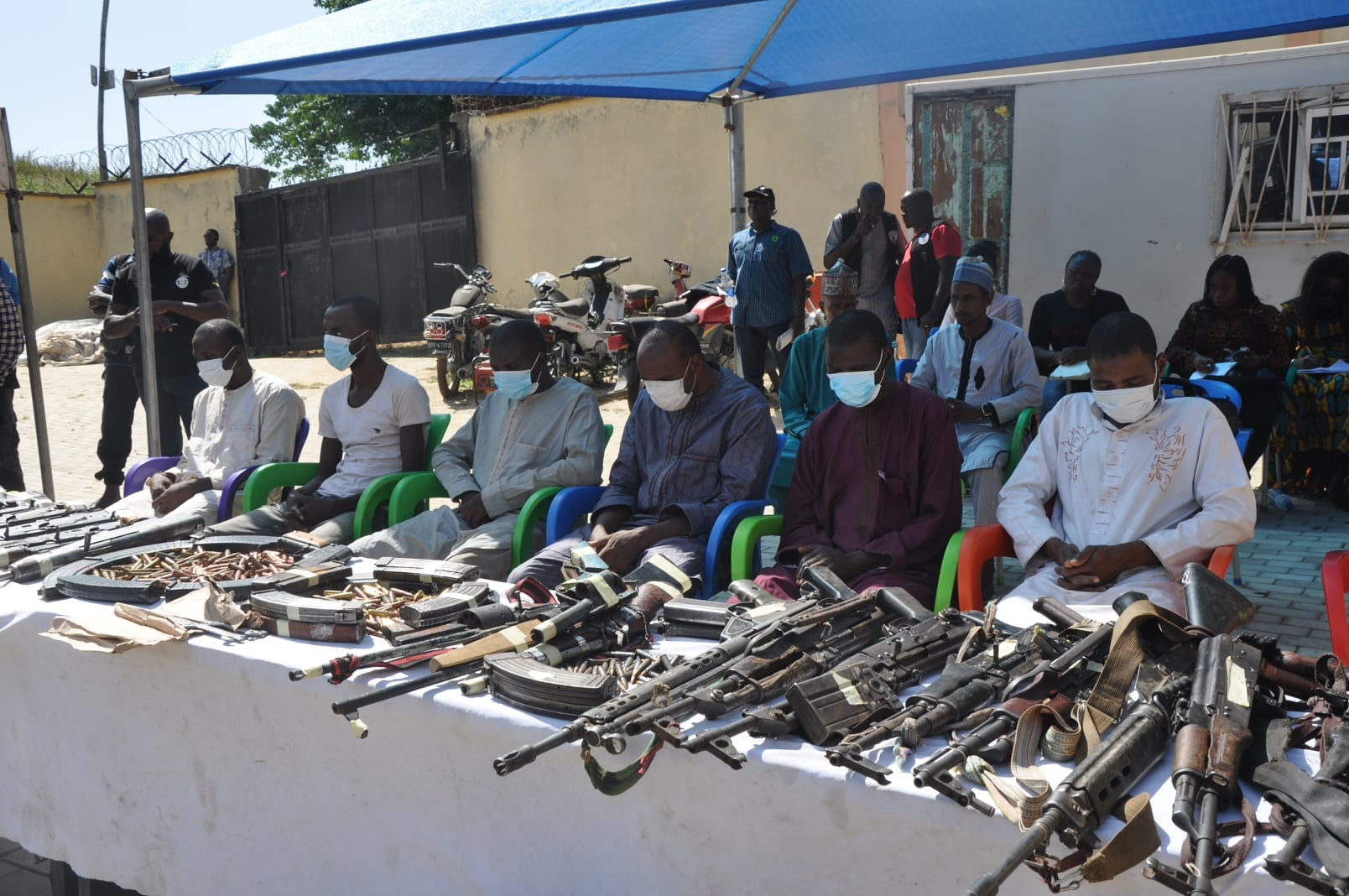 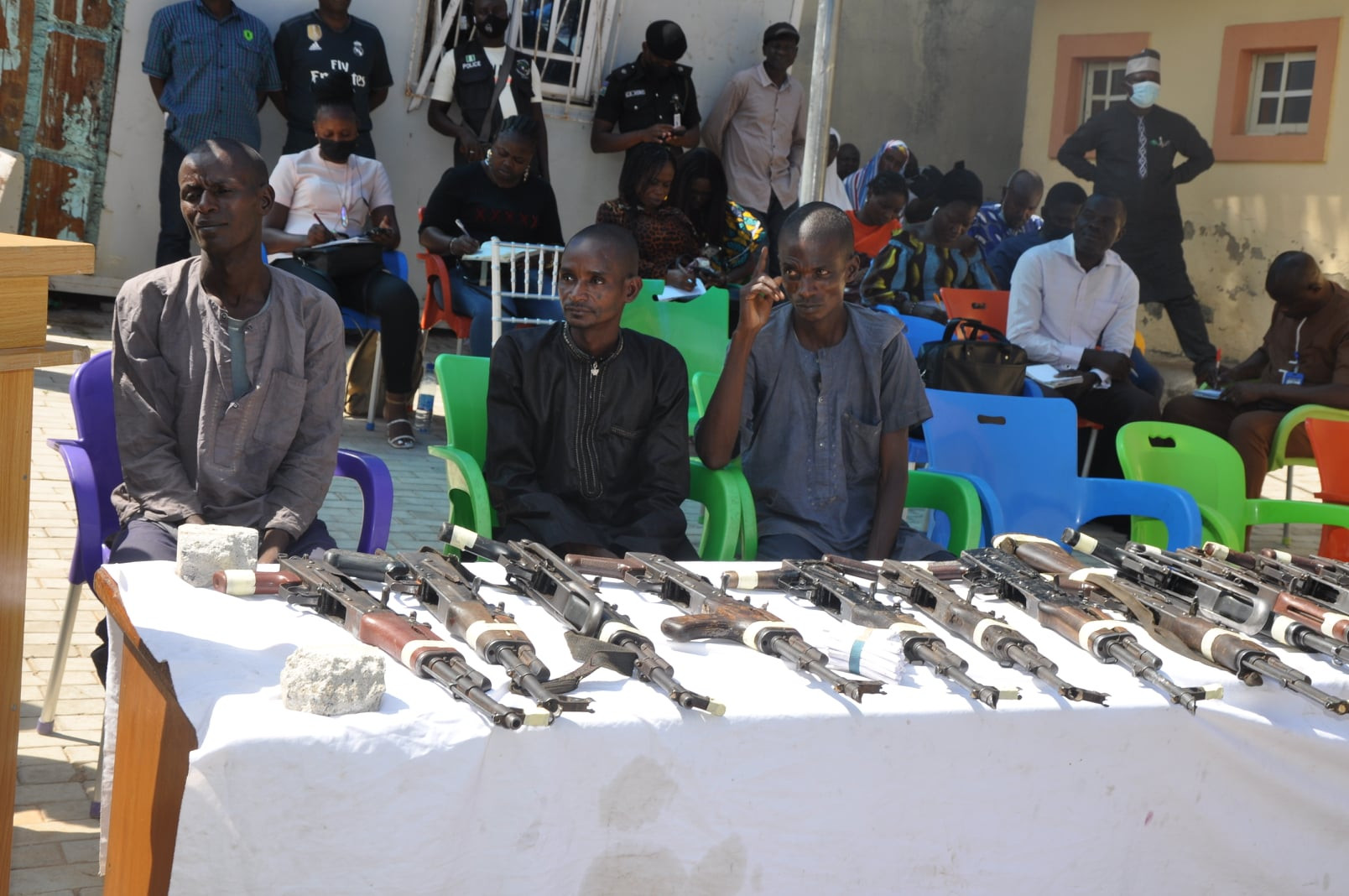 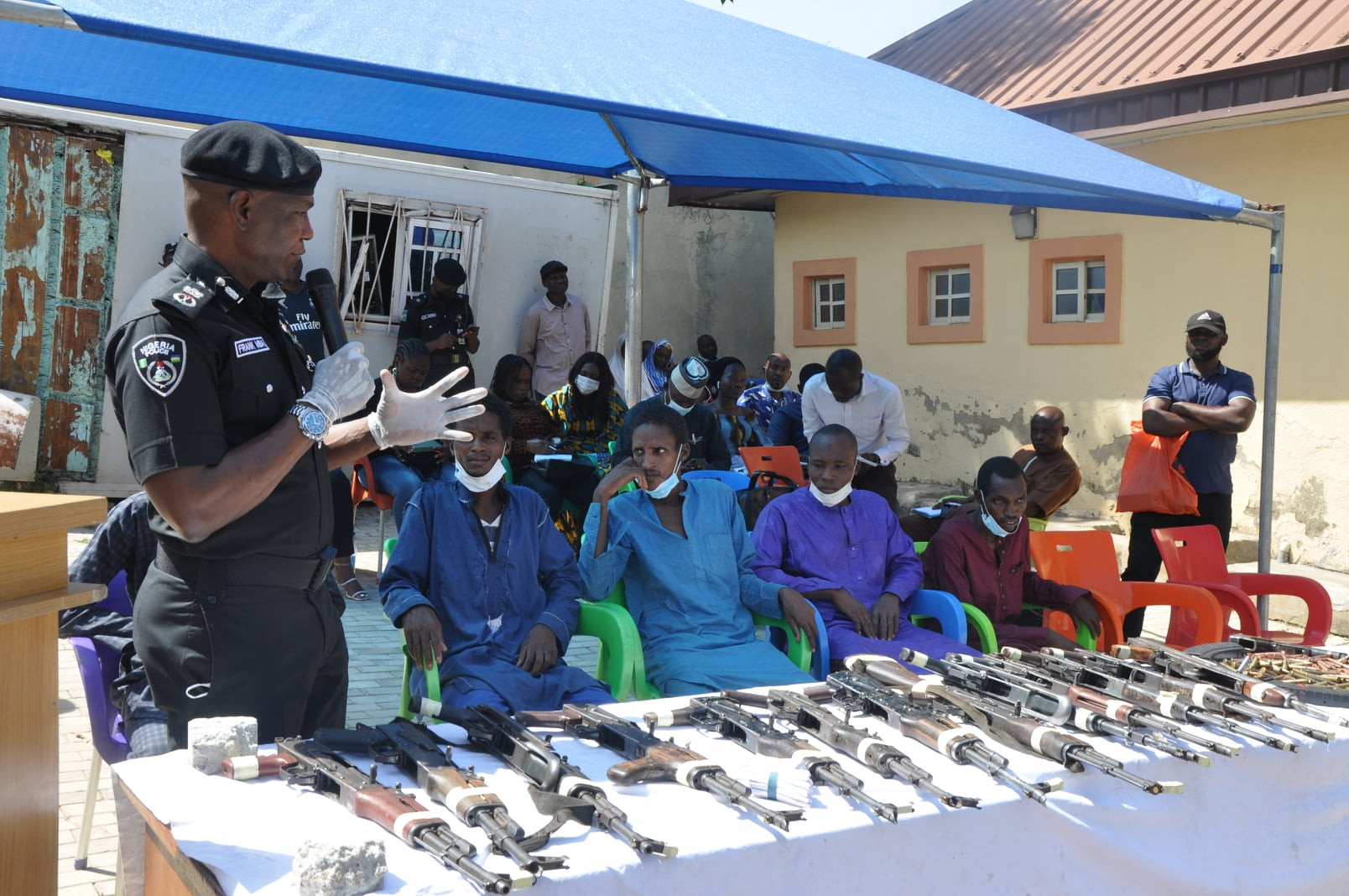 Notable amongst the cases is the arrest of six (6) notorious criminals involved in car theft in different parts of the country particularly Nasarawa, Port-Harcourt, FCT, Kebbi and Zamfara. The operatives equally apprehended a gang of six; Mohammed lawali, Suleiman Ibrahim, Mohammed Rebo, Bashir Audu, Monsoru Abubakar and Abubakar Hamidu, in connection with the attack on a Mosque in Mazakuka area in Mashegu LGA in Niger State where eighteen (18) people were reportedly killed and more than thirty (30) abducted. Force Public Relations Officer, CP Frank Mba, who made the disclosure in a statement on Tuesday, November 30, said the Police team equally recovered Nineteen (19) AK47 rifles, one (1) GPMG, three (3) revolver rifles, two (2) G-3 rifles, one (1) SMG, one (1) berretta pistol, four hundred and fifty-three (453) rounds of live ammunition of different calibre, twelve (12) magazines and seventeen (17) stolen cars from the criminals during the follow-up investigations. 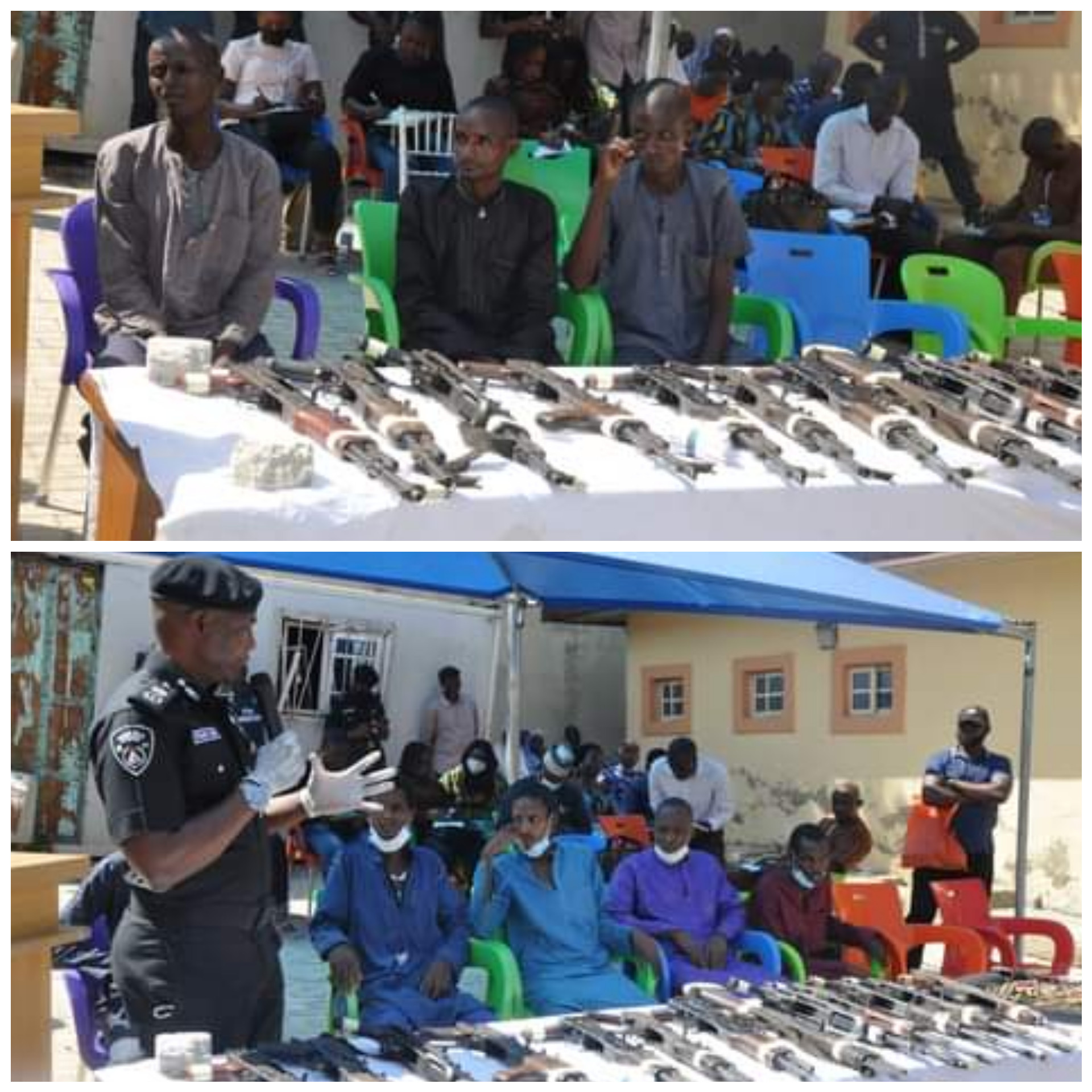 Secondly, is the arrest of one 27yrs-old Dayyabu Mohammed of Soba LGA of Kaduna State for illegal possession of five (5) AK47 rifles and 250 rounds of AK47 ammunition. The suspect was arrested during a crackdown on bandits at Saminaka Forest in kaduna State by operatives of STS. Investigation shows that Dayyabu Mohammed is an arms supplier to two (2) identified and wanted bandits in the North West and North Central parts of the country. The two bandit kingpins are Yellow and Budderi. Dayyabu Mohammed was intercepted while ferrying the weapons from Jos, Plateau State in a Golf-3 saloon car to the Bandit in their hideouts located in a forest at Birnin-Gwari, Kaduna State. These cars are sold in neighbouring countries at give-away prices and sometimes delivered to Alhaji Garuba in exchange for illicit weapons. The INTERPOL unit of the Nigeria Police is already working with their counterparts in Niger Republic to arrest the fleeing suspects in order to bring them to book. Operatives of the Nigeria Police Force Special Tactical Squad have arrested a total of thirty-two notorious suspects for their complicity in the crimes of kidnapping, armed robbery, arms smuggling, illegal possession of weapons, trading in illicit drugs, trans-border car theft, rape, amongst others. Investigations by the Police team revealed that the gang leader, Mohammed lawali and some of the gang members are escapees from the Lokoja correctional centre. Bashir Audu was arrested for his criminal role of supplying hard drugs to the gang. Two (2) AK47 rifles, three (3) fully-loaded magazines and various parcels of hard drugs were recovered from them. The IGP calls on members o?f the public who are victims of car theft to visit the STS office at Guzape, Abuja with proof of ownership to claim the vehicles bearing in mind that the colour, interior and vehicle number plate might have been tampered with. Also, is the arrest of the perpetrators of a recent deadly attack on travellers in the Tafa axis of the Kaduna – Abuja highway where two (2) women and their husbands were abducted by the criminals into the forest. Investigations revealed that the modus operandi of the suspects include snatching the cars at gun point and sometimes removing the cars from where parked especially crowded car parks like the Cinema, Church and Mosque. penetv