Other pastors who have lent their voices to the End SARS protest are Pastor Sam Adeyemi – who has been outspoken from the start of the protest, and Pastor EA Adeboye who recently supported the protests.
The senior pastor said the recent End SARS protest is no longer about just police brutality but is a manifestation of years of anger. He also commended Nigerian youths for maintaining law and order during the protests, saying: “The largely peaceful nature of the protests is commendable but it’s regrettable that some lives have been lost, However, the message is clear, Nigerians and the youths are resolute.” He pointed out that Nigerians have witnessed an unprecedented level of hardship, including the recent increase in fuel and several other tariffs, loss of jobs as a result of the COVID-19 shutdowns, hunger, and more and as a result, Nigerians youths are tired. He added: “These current protests will end someday as we can all see its moved from #EndSARS to #ENDSWAT and will ultimately move on to become “End Bad Governance” and its clear that this will not be business as usual and this time around our leaders must listen, take action and be serious.” 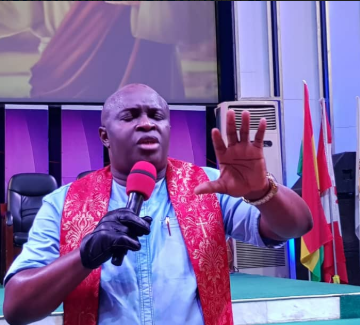 Bishop Chris Kwakpovwe, the publisher of Our Daily Manna Christian devotional, has lent his voice to the End SARS protest while insisting Buhari must listen to the youths and meet their demands. He said: “The last couple of months have been extremely difficult and excruciating for people, I deal with cases of attempted suicide, job loss, hunger and poverty on a daily basis and it’s about time the government rises up to its responsibility and do something.” He condemned the “seeming lackluster attitude of elected leaders and urged the government to look into the matter and see that the prices of these aforementioned are brought down.” “The on-going #EndSARS protest is beyond police brutality, it’s a manifestation of years of anger, neglect and a general explosion and President Buhari must listen to Nigerian youth to avoid greater damage because there’s serious suffering in the land,” he said. penetv