This morning, the state police command arrested Asimobi and the 13 others before the court on a 6-count charge bothering on conspiracy, disobedience to lawful order, willingly and unlawful destruction of the official seal of the Imo State Government, a conduct capable of causing a breach of peace.
Police prosecutor, Omo-Osagie M. A. told the court that Okorocha’s former appointees, Lasbery Okaforanyanwu, Ijeoma Igboanusi and his son in-laws, Uche Nwosu and Dr. Uzoma Anwuka, who participated in the reopening of the hotel are at large. The former Imo state governor had led some of his supporters to reopen the hotel owned by his wife, Nkechi, which was sealed by the state government last Friday, February 19. He and his supporters were later arrested by the police who were alerted by the state government. 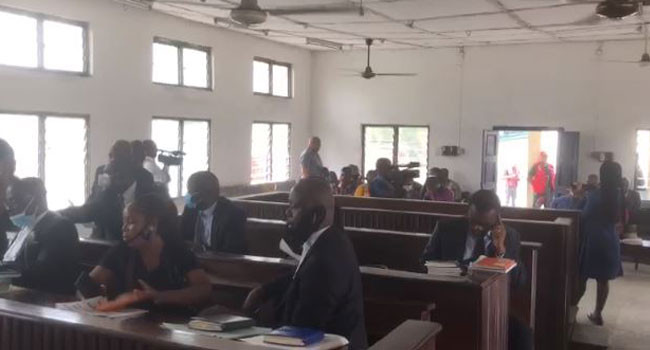 Others were Nev F. Raphael, Basil Mba, Darlington Ibekwe, Ebere Nwokeji, Eberendu Chimechifulam and Olu Chizoba. Others are unlawful possession of firearms and a defamatory action on social media against the Governor of Imo state with the intent to injure the reputation of the state govt and person of Governor Hope Uzodimma. Those arraigned with Ibekwe included Obasi Goodluck, Nwaiwu Ndubuisi, Median Ijeoma, Obor Victor, Ucheka Claudin, Sunday Chisom and Ekpendu Peace. The court granted all 14 accused persons bail with N5 million each totaling N70 million, a condition the court said must be fulfilled before they would regain their freedom. The Imo State police command has arraigned 14 persons including a senior legislative aide to Senator Rochas Okorocha, Steve Asimobi, before a magistrate court in Owerri, the state capital over the ‘forceful invasion’ of the Royal Spring Palm Hotel which was sealed by the state government. penetv