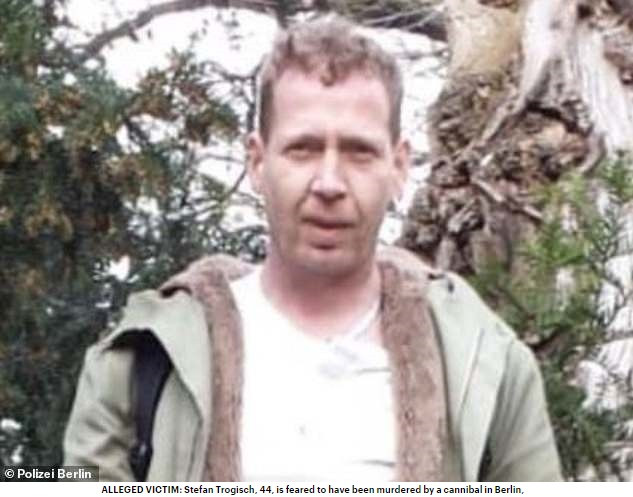 Trogisch, an electrical mechanic, who was known to use dating apps to meet male and female partners, didn’t tell his flatmates where he was going when he left his East Berlin flat on September 5.  The suspect has so far declined to answer questions.   Investigators are said to have obtained messages between the alleged killer and victim on a gay dating website, leading police to believe that they agreed to meet.   Bild reports that investigations revealed that the 41-year-old had browsed cannibalism-related forums online and had previously asked the internet whether a person could survive after having their penis cut off.  The suspect, Stefan R, was arrested on Thursday, November 19th after fleshless human bones were found in a park before sniffer dogs led detectives to his apartment in the German capital.  Police announced yesterday that the search for the missing Trogisch was now a murder investigation after tests showed that the bones belonged to him.  ‘The suspect had an interest in cannibalism,’ said prosecutors’ office spokesman Martin Steltner. ‘He searched online for the topic.’   Detectives also found evidence from Stefan R’s internet history which suggested he was interested in cannibalism.  Stefan R, a maths and chemistry teacher at a secondary school, was arrested at his home on Wednesday and brought before a judge.  State prosecutors later announced that he had been remanded in investigative custody on suspicion of ‘sexual murder with a base motive’. Prosecutors said it was unclear whether the victim had also had an interest in cannibalism.  Traces of the alleged victim’s blood were also found at the apartment after forensic tests, according to the Berliner Morgenpost, leading to Stefan R’s arrest.  After the pieces of leg bone were found in a park on November 8, police had two sniffer dogs that led investigators to Stefan R’s flat, where detectives found an empty wheelbarrow and a cooler.  Authorities said the meatless bones found by pedestrians in the park raised suspicion that the flesh had been artificially removed.  His alleged victim, 44-year-old Stefan Trogisch, had been reported missing by his flatmates in early September after leaving his apartment and failed to return.  ‘Because of the completely fleshless bone, and other evidence, we strongly suspect that Stefan T was the victim of a cannibal,’ a police spokesman said.  A German school teacher has been accused of cannibalism in Berlin over claims he allegedly murdered a man he met on a dating site before eating his remains.  penetv