On Thursday morning, protest group ‘Free Youth’ said in a statement on Facebook that, “high school and university students, workers and general people have assembled peacefully and have not started any violence.”
“But it is clear now the government has intentionally used the monarchy as a tool to get rid of those who are calling out for their better future, the future with equality and no more disparity,” the group said.
The government of Thailand has announced a ban on gatherings of more than five people under an emergency decree, and arrested several prominent protest leaders in a tight handed bid to stop pro-democracy protests that have gripped the country for more than three months. “As it has appeared that there have been several groups inviting, inciting and committing illegal assembly,” the decree read.  The Student-led protests have been ongoing across Thailand since July.
Thailand has some of the world’s strictest laws, and criticizing the King, Queen, or heir apparent can lead to a maximum 15-year prison sentence. “Therefore, there are enough grounds to believe that violent acts have been committed. And this has affected the government’s stability, safety, property and staff. This is no longer a peaceful assembly as it should be warrant by the constitution,” the decree added.
On August 10, Panusaya, spokesperson for the student union group United Front of Thammasat and Demonstration,
stood on a stage and publicly delivered a 10-point list of demands for reform to the monarchy.  Human rights lawyer and protest leader Arnon Nampa was arrested Thursday morning following a speech he made in the northern city of Chiang Mai on Wednesday. “There have been activities which affected the public’s peace and order.” Panusaya’s demands include revoking laws against defaming the monarchy, a new constitution, abolishing royal offices, ousting the military-led government and disbanding the King’s royal guards.
Footage from the scene showed police pushing back protesters who were shouting and making the defiant three-fingered salute from the “Hunger Games” movies as a car carrying Queen Suthida and King Maha Vajiralongkorn’s youngest son, Prince Dipangkorn, slowly drove past. The decree also permits officers  to implement new traffic rules and close certain premises to the public. 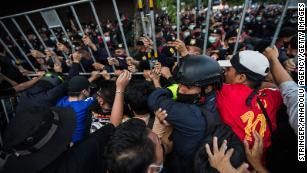 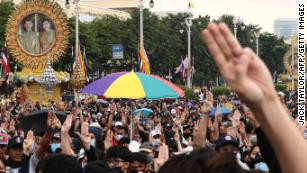 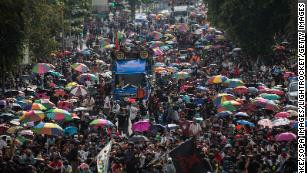 Pro democracy and anti-police brutality protests have increased recently all over the world with the US, UK, Venezuela, Iran and most recently Nigeria, with people taking to the streets to make their demands known to the government . The government also revealed that another reason for the emergency decree was protesters obstructing a royal motorcade. The decree, which came into effect in the capital Bangkok at 4 a.m. local time Thursday October 15, was enforced after thousands of protesters marched from the city’s Democracy Monument and broke through a police barricade to camp outside Prime Minister Prayut Chan-o-cha’s offices late Wednesday, calling for Prayut’s resignation and reform of the monarchy. 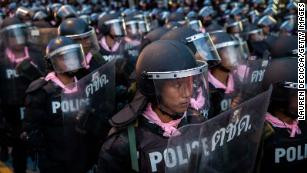 Panusaya was searched by officers in plain clothes at a hotel near the protest site, then arrested in connection with a speech she made in August, according to Thai Lawyers For Human Rights. As much as 22 prominent activists including student leader Panusaya “Rung” Sithijirawattanakul, 21, was arrested on Wednesday according to Thai Police Colonel Kissana Phathanacharoen. The emergency decree also includes a nationwide ban on publishing and broadcasting news and information including online information that incites fear among the public.  penetv